Our Relation with Allah

In the name of Allah the Most Gracious the Most Merciful.

Between the two absolute names of Allah “Most Gracious” and “Most Merciful” lies the definition of the relation between Allah SWT and humans.

All humans are protected by Allah SWT as he is the guardian and provider for all mankind as his title “Rabbu AlAlamin” entails. The extent of Allah’s graciousness and mercy spans the entire life span and cycle of every single human’s existence.

As only Allah determined and guarded the most suitable sperm to inseminate the selected woman’s ovum and once united Allah guides its path through the fallopian tract into the womb which Allah SWT designed as a prepared host to provide all the protection from any trauma, change in temperature, and a medium providing the inseminated egg that now with Allah’s grace has shape shifted to a  leech (Alaqa) than can bond to the wall of the womb and obtain the necessary blood for its growth…for the sake of staying in subject I have chosen skip the following miraculous phases of foetal growth and child birth to grownups’ requirements of sustenance (Air, Water and Food) the air is full of Oxygen yet it doesn’t combust into flames, Oxygen and Hydrogen mixed in a specific ratio forms Water that is vital for all bodily functions and also crucial for growth of all things Alive, including plants, animals and fish which are the mains sources human food. (“We made from water every living thing. Will they not then believe?” Surah 21: Ayah 30)

Non-believers bask in the blessings of Allah SWT yet they do not believe in Allah SWT. Yet he does not punish them until they go through life get to know of a messenger with a religion that calls to worshiping Allah only and guiding humanity to a sustainable system of life (“.. … And never would We punish until We sent a messenger.” Surah 17: Ayah 15)

Muslims enjoy a balanced relation with Allah fully aligned with Allah being “Most Gracious” and “most Merciful”,

A Muslim remains balanced in his relation to Allah SWT between being fearful of Allah’s punishment and wishful of his mercy; in doing so a Muslim after sinning; is guarded from being disparate “Qunoot” which is being over fearful of not being forgiven for the sins committed and with no hope for avoiding hell fire, as a Muslim is equally guarded from taking Allah’s mercy for granted resulting in being complacent and delaying repentance “Tasweef”. (“Those whom they invoke seek means of access to their Lord, [striving as to] which of them would be nearest, and they hope for His mercy and fear His punishment. Indeed, the punishment of your Lord is ever feared.” Surah 17: Ayah 57)

AlRahman AlRaheem, “Most Gracious” and “most Merciful”, the two attributes do not often accompany one another, let alone in their absolute form; therefore Allah’s mercy should not be taken for granted as it is accompanied with his magnificence as Allah’s punishment should not be unjustly feared as he is merciful.

The embodiment of the two paradigms is coined in Allah’s warning to us (“Indeed, Satan is an enemy to you; so take him as an enemy.” Surah 35: Ayah 6) as he warms us of the Satan being the enemy and orders us to take/treat him as an enemy. That is mercy from our guardian whose magnificence has granted Satan ability to pursue humans and lead them astray while our guardians order to take Satan as an enemy is a merciful encouragement for us to remain steadfast and pious not to allow Satan to have his way (“My Lord, because You have put me in error, I will surely make [disobedience] attractive to them on earth, and I will mislead them all” Surah 15: Ayah 39).

The governing core beliefs that set the path for a true believer are:

as stipulated in Surah Al Baqara (“Indeed, those who believed and those who were Jews or Christians or Sabeans [before Prophet Muhammad] – those [among them] who believed in Allah and the Last Day and did righteousness – will have their reward with their Lord, and no fear will there be concerning them, nor will they grieve.” Surah 2: Ayah 62)

As absolute belief in Allah mandates following his orders and refraining from all that we have been requested to avoid and refrain from, strict adherence to that belittles ones’ self “Nafs” from being a controller of one’s life and directly leading to wanting the afterlife which is the last pillar and the second paradigm we refer to. The day of judgment has also been mentioned as the last of four component  that constitute piety “Taqwa”  Ali bin Abu Talib said: “Taqwa means fearing Allah, practicing according to the Qur’an and Hadith, being content with little, and preparing for the Day of Judgment”.

Now that we have set the belief references we have to accompany it with deeds and actions as the Quran always follows (“And as for those who had believed and done righteous deeds, they will be in a garden [of Paradise], delighted.” Surah 30: Ayah 15)

The basis of charge or burden of deeds “Takleef” is ability therefore a Muslim who does not have the means for a deed is exempted from it either partially or fully, for example; a Muslim that is poor if exempted from Zakat and if the poor Muslim is terminally ill he exempted from fasting until his health improves, also if a Muslim is disabled he is he exempted from kneeling down while praying which is the epitome of convenience and lenience in worshiping Allah.
We have listed the pillars of belief, deeds and the preconditions for the same; however Allah SWT in Islam sets forth a way of life that can turn the daily activities of the follower into acts of worship if followed strictly (for e.g. encouraging ones’ family for prayers, being good to ones’ neighbours, always going the extra miles for ones’ parents, working with precession and dedication, even sleeping) as long as the deeds are intended to please Allah Only. (Neither expecting praise from other, nor does it act as ego booster) for Allah does not accept any deed performed for the pleasure of any other entity; be it ones’ self “Shirk Asghar”, others praise “Riyaa” or Satan. As Allah is indeed superior “AlMutakabir” and has no partner (“And say, “Praise to Allah, who has not taken a son and has had no partner in [His] dominion and has no [need of a] protector out of weakness; and glorify Him with [great] glorification.” Surah 17: Ayah 111).
As it’s unfair and illogical to be serving ones’ self, other humans or Satan end expect reward from Allah SWT as it is unfair and illogical to work for one entity and expect remuneration from third party.

To summarise, a Muslim who is a believer in Allah, And the day of judgment is requested to maintain his piety by continuously comparing his status quo against the description of the pious ones in the holy Quran and remain steadfast with the ones who spend their life in good deeds as this sets his goal, which is the pleasure of Allah “Ridha Allah” (“And keep yourself patient [by being] with those who call upon their Lord in the morning and the evening, seeking His countenance. And let not your eyes pass beyond them, desiring adornments of the worldly life, and do not obey one whose heart We have made heedless of Our remembrance and who follows his desire and whose affair is ever [in] neglect.” Surah 18: Ayah 28) 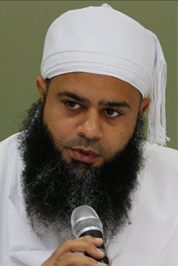